Brief synopsis: Paige Lewis, a video blogger, invites her sister, Lindsay, to join her adventure-seeking group on a dive near a remote rock in the ocean. Not wanting to be stopped by any authority, Paige enlists the help of a dubious pilot to take the group out. The plane they are on crashes into shark-infested waters. As a group of sharks picks them off one by one, only Lindsay is left to try and survive the ordeal.

Is it any good?: Surrounded—Also known as Frenzy—is staggeringly bad. It is the kind of awful that I will reference, in future reviews, as a benchmark for wretched, unoriginal, poorly thought out, nonsense. Graham Winter, who scrawled this crap on a milk carton I’m guessing, should never be allowed to write anything ever again. Ever. Just awful.

Spoiler territory: Having invited her sister, Lindsey (Aubrey Reynolds) to join her group sometime before, Paige Lewis (Gina Vitori), a video blogger, finds that her viewership is drawn to her sister’s relationship with one of the group, Seb (Taylor Jorgensen). Paige decides to focus the expedition, at Seb’s behest, on Lindsay.

Paige’s crew, Seb, Lindsey, Kahaia (Lanett Tachel) and Evan (Michael New) are going on another expedition off the coast of a privately owned island. The pilot, Javier (Pope Bustos) cautions Paige, telling her that the waters around the island are restricted for a reason.

Paige laughs it off, paying him extra to switch off the plane’s transponder, so as nobody can track them. Paige tells Kahaia, who, being a long-time cohort of Paige, is excited by the clandestine nature of the venture. Lindsey, hearing the transponder’s off, questions the safety of such a decision. Kahaia tells her not to worry.

Seb tries to reassure Lindsey about the upcoming dive, telling her they have been planning the expedition for months. Kahaia mentions to Evan that Lindsey is likely to be sticking around now that she is with Seb. Evan agrees. They all get on the plane.

On the plane, Paige makes a short video boasting about the group going to dive in a protected sanctuary. The plane bucks. They can see the cove they are heading to, it is about half a mile away. Javier tells them he is going to take the plane down. Evan excitedly points out that he can see sharks.

The plane bucks some more. Paige tells everyone to hold tight. One of the wings comes off of the plane, and the door goes with it. Paige is sucked out of the plane. The plane hurtles toward the water, crashing and splintering into many pieces.

Lindsey surfaces from the wreckage looking and calling out to see if anyone else has survived. She sees a shark swimming around her. She remembers Paige asking her to join the group. Her reverie is interrupted by Kahaia calling her name. She tells her she saw a shark. Seb calls out to them and comes swimming over. 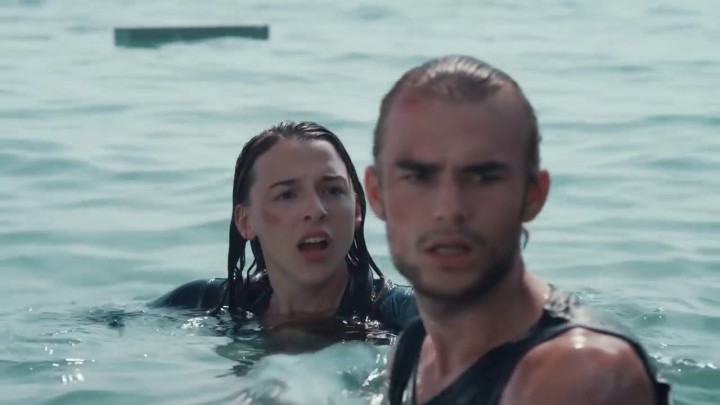 There’s something in the water? Yeah, us!

They spot a barely alive Javier. He tells them that they need to switch on the transponder in the plane’s tail. He also tells them that the cove has supplies for them to contact the mainland. Kahaia dives to find the plane’s tail. Lindsey tries to keep Javier conscious. Kahaia gets an inflatable life raft from the plane. Javier slips into unconsciousness and disappears into the ocean.

Lindsey and Kahaia get into the raft. Lindsey looks for Seb and sees him swim towards the cove. She calls out to him. He says he is swimming to the cove to get the supplies. Lindsey jumps into the water, swimming after him. She thinks they should all stay together in the raft. Seb tells her to go back to the raft. Kahaia spots three sharks swimming towards them.

Kahaia tells Lindsey that she was not meant to be in the group. She was only there as clickbait. She is not an adventurer. Kahaia tells her about surviving her second tour whilst in the army. The sharks attack the raft again, knocking the women out of the vessel.

Kahaia gets eaten and Lindsey gets back into the raft. She is all alone now. Lindsey recalls how much faith Seb always showed in her. She sees a boat but is unable to get its attention. She decides she needs to dive to the plane’s wreckage. She gets a flare but has to use it to scare the sharks when they try to attack her.

Back in the raft, she sees Evan hanging onto a piece of flotsam. She makes her way over to him. As she tries to pull him into the raft, she realises that he is dead, his lower body eaten away by the sharks. The sharks come and take the rest of him. A distraught Lindsey contemplates committing suicide but decides against it.

She makes a paddle and heads for the cove. The sharks are still after her. They puncture the raft. Lindsey paddles furiously for the cove. She jumps off of the raft and swims for the cove, reaching it as one of the shark’s surfaces.

On the cove, there is a small cupboard where she finds some water and a flare gun. She sends up a flare. A short time later, she sees Paige. She was around the other side of the cove on a piece of debris. She cannot swim to the platform as she has damaged her leg. 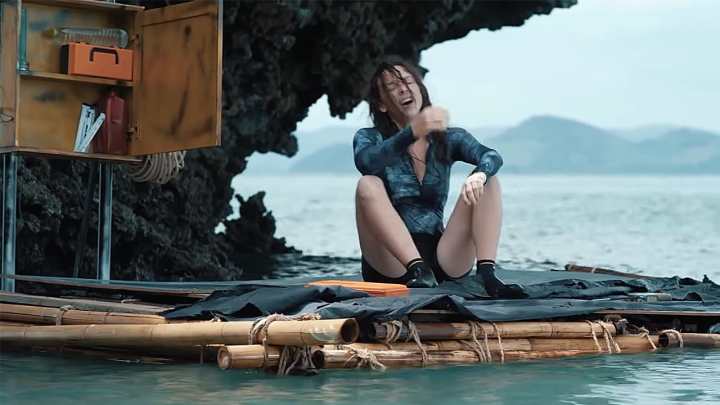 After a bit of effort, Lindsey manages to get Paige onto the platform. Lindsey tells her that everyone else is dead. They see a boat and the captain (Russell Geoffrey Banks) radios them, saying that they are coming to help. Lindsey tells him that there are sharks in the water. The captain tells his mate. They are shark fishermen.

The captain’s mate falls into the water when one of the sharks hits their boat. As the captain reaches out to help him, the shark bites his arm off. The sharks eat both men. Lindsey remembers Paige asking her and Seb to pretend to break up so as to increase views. Seb refused.

Back in the present, the sharks circle the platform. They decide they have to kill the sharks. They kill one shark by tying a rope to a rock. Lindsey jumps into the water as bait and as the sharks get close, Paige pulls the rock down onto the closest shark killing it.

Lindsey wants to get the harpoon gun that the captain dropped into the water. Paige gets some more rocks to try and distract the remaining sharks whilst she is in the water. The sharks are initially fooled but quickly head towards Lindsey. Paige jumps into the water, stabbing at the sharks. She gets bitten on the other leg and Lindsey pulls her out.

A distraught and dying Paige confesses to always having been jealous of the attention that Lindsey received, and even trying to seduce Seb. He turned her down and was planning to propose to Lindsey on the trip. Paige dies.

Lindsey kills a second shark by burning it up with some flammable liquid and the flare gun. The last shark takes Paige’s corpse. Lindsey jumps into the water and swims to the captain’s now abandoned boat. The engine does not work.

She straps a small blade to an oxygen tank. The shark bites the engine off of the boat. Lindsey strikes the nozzle off of the tank, shooting it into the shark and killing it. She is found by the coastguard. Some months later she records a video as a homage to her sister and the group. The end.

Surrounded is really not a good film. Scoring a paltry three-point one on IMDB, it could be argued that the score flatters it. It says more about my taste in women than the quality of the performance that I kept watching just because of Aubrey Reynolds.

Whilst Reynolds is very attractive and lithe, on this showing one could not call her a great actor. Truth be told, except for Taylor Jorgensen, the acting is pretty ropey from all in attendance. That being said, Reynolds, possibly because she has the most screen time, has the most ‘actor-y’ performance, a lot of her performance seeming more directed than character-driven.

I am contradicting myself a little as, on a repeat viewing, Gina Vitori’s Paige was quite a good character. Still, there is too much acting going on. With the addition of really poor CGI, and reusing of the same sequences, Surrounded looks cheap and amateurish. Graham Winter’s script is woeful, causing the actors mostly to talk at one another as opposed to with one another. 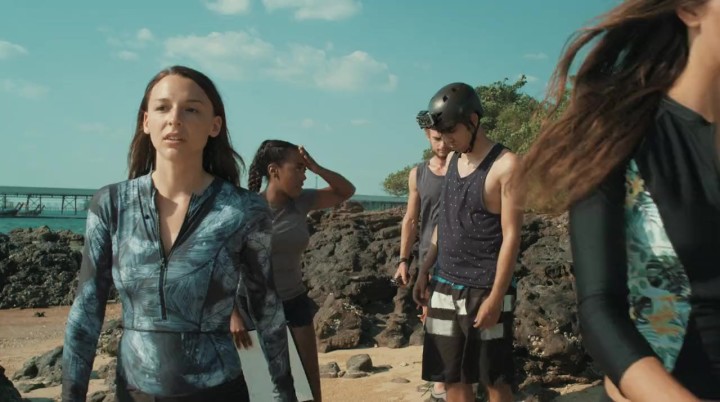 We are beautiful adventurers!

For a group that supposedly spends their lives going on dives, they are all remarkably awful swimmers. Though I suspect looking like you are swimming is quite difficult when your feet can touch the bottom.

It is, of course, Spielberg’s fault that we have suffered so many shark inspired thrillers. It is not his fault that some are so bad. He literally created a blueprint for how to make a shark film.

Directed by Jose Montesinos, Surrounded moves along briskly enough through its eighty-five-minute runtime. As I alluded to earlier, there is a lot of scene repetition, especially when it came to the sharks approaching. Some of these scenes were obviously just to fill the runtime. The runtime would have been better served with a more organic approach to the script.

The editing, by Don Money, is actually quite good in the film, with some great flourishes between the present situation and Lindsey’s memories. The music, however, is awful and overdone, as is the way with made-for-television movies. Relentlessly foreboding and too loud, it does not allow tension to ebb or build.

Surrounded is a silly film, poorly executed. It will leave you slack-jawed with how bad it is. Avoid.