William is a depressed young writer who only thinks of death and killing himself. A chance encounter, when trying for the umpteenth time to commit suicide, with an ageing assassin, Leslie, results in him hiring the aged killer. Leslie promises to fulfil the contract within the week.

When William receives a call from a publisher saying they are interested in his book, a meeting with one of the company’s editor’s, Ellie, has him rethinking his desire to die.

Is it any good?

In a word, yes. A quirky British production, the film has great performances across the board and is an enjoyable ninety-minute viewing experience.

William declines his help. The man gives him a card, telling him he can contact him if he should change his mind. William takes the card. The man leaves him to his suicide attempt. William jumps off of the bridge. As he falls, a party ferry is passing and he lands on the boat, crashing through the ferry’s canopy, on to the dance floor. He is alive.

The next day, William is fired from his job at a leisure centre, where he worked as a lifeguard. He returns home to his dingy bedsit. He opens his mail. It is a rejection from a publishing company. Still suicidal of thought, he decides to gas himself. Turning the gas on and putting his head in the oven, he realises his gas has been cut off.

Later the same evening, he pulls the card that was given to him by the man at the bridge from his pocket. It has a name on it: Leslie O’Neil (Tom Wilkinson) and the profession below the name: assassin.

William meets with Leslie the next day. William does not think that Leslie looks much like an assassin. Leslie wonders aloud how many assassins he has met. Leslie asks how does he know William is serious about dying. He tells him that when he saw him on the bridge, that had been his seventh attempt.

Leslie asks how he would like to die. What are the options? Leslie pulls out of an illustrated brochure. William says he would like a hero’s death, saving a small child from being hit by a car and a crowd applauding his bravery. How much money does he have? Leslie enquires. Two thousand pounds. Leslie tells him he cannot afford such an elaborate death.

What can he get? Leslie tells him that he will shoot him. Quick and painless. William worries that it might be a scam. Unfortunately, references are few and far between. Leslie gives him a contract, telling him it is a standard thing in the Guild of Assassins.

William has never heard of them. They do not advertise, Leslie tells him. How long will it take? William asks. Once the money has cleared, it will take a week, he is told. William signs the contract.

Leslie goes to the Guild of Assassins to register the job. The receptionist, Wendy (Cecelia Noble), tells him he is just in time to hit his monthly quota. Leslie asks if Harvey (Christopher Eccleston), head of the Guild, is in. No, all the assassins are away at a conference. Leslie does not know about the conference.

The next day, William calls Leslie. He has a few things that he wants to do before he is killed, does he have enough time? Leslie tells him he is at work but he is not the target. William decides to begin a book inspired by Leslie’s life as an assassin of suicidal people.

William gets a call from Ellie (Freya Mavor) who is an assistant at publishers, Steedman and son. She read his book and likes it. She wants to arrange a meeting. Can he do next week? William tells her no, next week will not be possible. Ellie says there is a cancellation and that they can meet the next day. William agrees to a lunch meeting.

William sees Leslie outside, watching him. He goes and asks if he can postpone the killing until after his meeting, telling him where the lunch meeting is. Leslie tells him the contract is non-refundable and he will kill him. William says that is fine. Leslie makes a note of William’s meeting.

William meets Ellie the next day. She is very attractive and a little bit dark, humour wise. Their meeting is interrupted by Ellie’s boss, Brian Bentley (Nigel Lindsay), who is abusing some underling on his mobile phone. He ends his phone call.

Brian sits down, shooting ideas for the book publication. William does not like any of them. William expounds his nihilistic viewpoint and Brian begins to rant about the pathetic attitude of modern youth. Brian’s rant is interrupted by a bullet through the forehead, William having bent down to pick up a pen for Ellie.

William realises that Leslie is there to kill him. He stands up looking to see where the shots are coming from. As Leslie is about to shoot at him again, a waiter walks by and blocks the shot. Leslie leaves the scene of carnage. Ellie pulls William under the table. 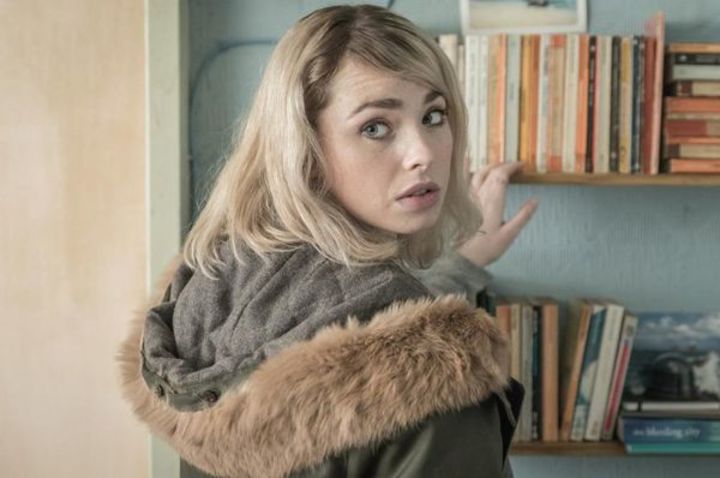 Am I not worth living for?

Leslie returns home to his wife, Penny (Marion Bailey) and tells her he had a bad day at work. A really bad day. Penny says it will be fine. Leslie is not so sure. Ellie turns up at William’s flat. She wants to start working on the book as she has been given compassionate leave after the incident at the lunch meeting. William tells her he cannot do it. She tries to convince him otherwise.

William and Ellie go to a country house that Ellie knows of. Leslie has been taken to see Harvey. Harvey is not happy about the mess at the lunch meeting. Though it turns out that Brian had a contract out on him anyway, Harvey wants Leslie to retire.

Leslie does not want to retire. Harvey tells him they even bought him a clock, putting a gold carriage clock on the desk. Leslie refuses to take the clock and leaves.

Harvey tells Ivan (Velibor Topic), the Guild’s top assassin, to kill him. William asks Ellie whose house they are in. After initially lying and saying she did not know, she tells him it was her parents. They discuss how their respective parents died. Ellie’s parents died in a car crash, William’s were crushed by a falling piano.

Ellie says they should kill themselves. She goes and gets two kitchen knives. She says that killing one another will probably not solve the mystery of life. They would probably have more chance if they are alive. They hold the knives and Ellie counts down. They drop the knives and kiss.

Penny is trying to persuade Leslie that retirement would be a good thing. Leslie is too invested in his life as an assassin to hear it. Penny tells him that if he does not want to retire, he will have to complete the contract.

Ellie and William discuss the contract William took out on himself. He tells her how he had wanted a heroic death, saving a child. Ellie deconstructs the scenario, pointing out that it would be unlikely that such a death could be properly staged, thus rendering it unheroic. William is quite enamoured by her.

Penny leaves Leslie at home alone, going off to a sewing contest. Ivan is outside watching the house. He sneaks into the house, looking for Leslie. Leslie leaves in pursuit of William. Leslie finds William and Ellie. He says he has to kill William and probably Ellie. William tries to persuade him not to kill Ellie. He is interrupted by a phone call from Penny.

Penny tells him that someone killed his budgies. Leslie, having ended the phone call, is about to shoot William and is shot by Ivan. He comes into the house and takes Leslie’s gun, giving it William. He tells William to kill himself. Both William and Ellie are confused. Ivan tells him that it has to look like a suicide.

Leslie, who is not dead, stabs Ivan in the back and bashes his head in, killing him. Leslie still wants to kill William so as to complete his contract and not be forced to retire. Ellie says they can put the contract on Ivan and in that way he will have fulfilled his contract. They write up a contract and dispose of Ivan.

Leslie returns home, much to Penny’s relief. Harvey comes to see Leslie. He is not happy, even after Leslie gives him the contract for Ivan. Leslie points a gun at him under the table. Harvey also pulls out a gun, hidden under the table.

Penny comes into the room, showing Harvey the cushion that won her first prize at the competition. Her story persuades Leslie to retire. Harvey gets up and leaves. Penny is glad she did not have to stab him with a kitchen knife.

Ellie and William are out for a walk, chatting happily, William happy to be alive, having met Ellie. He sees a boy run into the road. The boy does not see a van coming. William pushes the boy out of the road, to safety. He gets hit by the van. As he lies injured, Ellie by his side, a crowd gathers and applauds his bravery. The end.

Dead In a Week (Or Your Money Back) is quite an enjoyable film except for the Dahl-esque ending. The story of the depressive William searching for significance through repeated acts of attempted suicide is a bittersweet one.

The fact that he should meet a man at the other end of the age spectrum in Leslie, also trying, in an entirely different way, to reinforce the significance of his existence is, though extreme, something that a lot of us can relate to.

Written and directed by Tom Edmunds, Dead In A Week (Or Your Money Back) is an interesting take on depression, love, defining of character and decisions. Like many people, Leslie feels that his job defines him.

Without his profession, something that he has always been confident in doing, he does not know who is he and that, plus the dreaded thought of retirement scares him.

William, on the other hand, has not found his place in the world. Orphaned from a young age and alone in the world, something exacerbated by his choice of wanting to succeed in the most insular of professions, that of a writer, and failing, pushes him towards depression and his view of the world.

The performances from all of the actors are good. Edmunds’ witty script, especially for Eccleston’s Harvey, is particularly sharp. Music plays its part as well, with certain tunes magnifying scenes. Barnard is perfectly cast as the dour William, as is Wilkinson as the seasoned hitman, Leslie, working in a profession that is leaving him behind.

Mavor’s almost deadpan Ellie is a joy, pulling William out of his funk and showing him that there are reasons to embrace life. At ninety minutes long, Dead In A Week eases through the first half of the film and gathers pace once William has signed the faithful contract.

I don’t know if it is because it is a British film or just a deliberate decision to avoid a Hollywood ending, but William getting knocked down in the final scene did take away some of the joy for me. It is a minor gripe in an otherwise very good film. Dead In A Week is worth ninety minutes of your time.